The Man in the High Castle Wikia
Register
Don't have an account?
Sign In
Advertisement
in: Article Stubs, Characters, Male Characters,
and 2 more

He was arrested for the murder of Trade Minister Nobusuke Tagomi. While in custody, he committed suicide upon hearing the Emperor's announcement of Japan's withdrawal from the Pacific States.

Yamori and Ryuu Masuda served as junior lieutenants in Australia. At some point Yamori's platoon was outflanked by the Australian Army, however Masuda violated orders and day-marched his unit to aid Yamori's platoon. Despite being reprimanded for it, they both developed a strong bond.

Yamori attended the funeral of Trade Minister Nobusuke Tagomi, and overheard Crown Princess Michiko ordering the Chief Inspector of the Kempeitai, Takeshi Kido to investigate the murder and report the findings directly to her. After the Princess left, Yamori orders Kido to not report to the princess, but directly to him.

The Black Communist Rebellion assassinate Ryuu Masuda, now a General when he was visiting an auction house in San Francisco. Enraged, Yamori and a group of his officers pledge to destroy the BCR.

Kido, while investigating Tagomi's murder, find out that Ijima, a Japanese Army captain, who is secretly working for Yamori, was the one responisible for the assassination, as opposed to the Black Communist Rebellion. Meanwhile, the Crown Princess sends Imperial Japanese Navy Admiral Inokuchi to negotiate a peace treaty with the BCR, as the Japanese have overextended their supply lines and were unable to engage in a war against the rebels while their war against Chinese communist insurgency (who supplies the BCR) drains more and more of their military forces. However, the Kempeitai ambushed the meeting, killed BCR leader Equiano Hampton and arrested Inokuchi. Yamori intervened and relocated the Admiral's court-martial to San Francisco.

Yamori sentences Inokuchi to execution by firing squad, for collaborating with the BCR and also for his alleged role in the murder of Tagomi. Kido was told to oversee the execution, but at the last moment had a change of mind, and quickly told his men to arrest Yamori for his role in the murder of Tagomi. He then hung himself in prison after the Emperor announced the Japanese withdrawal from the Pacific States. 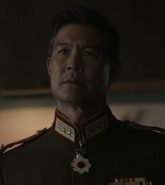