The Man in the High Castle Wikia
Register
Don't have an account?
Sign In
Advertisement
in: Article with Excessive Historical Information 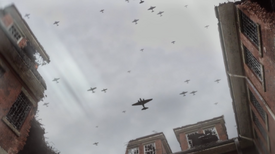 World War II, also known as the Second World War, was an international conflict fought between the Axis Powers and Allied Forces. In the timeline of The Man in the High Castle, this war ended with the defeat of the Allied Powers, resulting in most of the world, including the United States of America, being divided between the Japanese Empire and the Nazi Reich.

According to both the novel and the series, the main split between the two timelines began with the successful assassination of President Franklin D. Roosevelt in 1933 by Giuseppe Zangaras. Afterward, the United States is subsequently led by John Garner (FDR's vice president) and then by Republican John Bricker. These presidents led to the destabilization of the country and both failed to enact the New Deal to pull the country from the Great Depression. They continued to maintain an isolationist philosophy during the war and, as a result, were unable to support the United Kingdom and the Soviet Union's fight against the Greater Nazi Reich and Japanese Empire.

In the following years, Nazi Germany conquered the Soviet Union and exterminated most of its Slavic peoples. They also either invaded or forced the surrender of the United Kingdom. The Japanese Empire then destroyed most of the United States Pacific Naval fleet in a decisive battle at Pearl Harbor (much more destructive than in our timeline), and conquered in short order Hawaii, Australia, New Zealand and the rest of the Oceania. Hawaii was briefly retaken by the U.S. in February of 1942. Prior to 1945, the Axis powers successfully conquered South America, Central America, the Caribbean, the US Territory of Alaska, as well as Newfoundland/Labrador and Canada. The refugees from almost the entire world settled in the United States either in Refugee Camps, Ghost Towns or other accommodations. By 1945, the Axis Powers were strong enough to launch a successful invasion of the U.S. from both the Pacific and Atlantic coasts, in addition from the Mexican and Canadian Borders, after having delivered an ultimatum of unconditional surrender to the United States - or face invasion.

Invasion of the United States

Following the defeat of the European empires and non-European nations, their former military personnel enlisted in the Canadian and US militaries in anticipation of both countries being invaded.

After the surrender of Britain and other Allied governments in exile, their colonies in the Americas became Axis territory, however the Allies were quick to grab these territories before they could have been used as an opening point for an invasion.

The Japanese Occupied the Galapagos Islands and the nazis invaded Iceland and Greenland simultaneously. 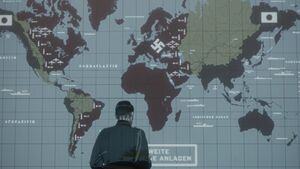 The Nazis then detonated the first atomic bomb (dubbed the Heisenberg Device) over Washington D.C. on December 11th, 1945, forcing the United States to surrender. Despite this, the Axis Powers were forced to fight a hard and tenacious war against the American Resistance, the axis Powers launched an invasion of the United States by attacking its coasts and launching an land invasion through South America , German troops landed on the American coast and broke through the defense lines at Long Beach and went on to occupy major American cities along its east coast. The Japanese launched an amphibious invasion of the west coast and pushed through american defense lines and went on to occupy California and other major cities. The nazi Reich occupied the ruined city of Washington D.C which was once a symbol of american power, the Axis powers were concentrating all their forces at the campaign which caused the resistence to lose major battles to the invading superpowers. Despite fighting hard, the American resistance was defeated and was pushed into the interiors of the country and eventually surrendered. On September 18th 1947 the Nazi Reich declared that the resistance had finally been put down.

Followed by the surrender, the Axis Powers concluded victory with no opposition left to threaten the Axis occupation. This day was marked as Victory in America Day (or VA Day) which officially ended the conflict with an Axis victory. The victorious Axis Powers partitioned their conquered territories and installed puppet governments in the occupied regions.

In a parallel timeline, WWII was fought from 1939-1945, with the United States entering the war on the side of the Allied Powers after facing an attack from the Japanese Empire. While successful, the Japanese attack failed to eliminate American aircraft carriers, leaving the US Pacific fleet operational to fight the Japanese advances. Allied troops were involved in an eventual invasion of Europe through Occupied France, and through Italy, once German forces were pushed out of Africa. The Soviet Union successfully resisted German advancements, and began pushing back towards Berlin, leaving the Germans to face three separate fronts, which they were ultimately unable to do. Soviet troops eventually reached Berlin, resulting in capitulation of German forces on 2nd May, 1945.

The Japanese Empire came through the war in a relatively better position, though defeated as well. Despite the loss of numerous battleships in Pearl Harbor, American forces were able to wage a successful Pacific "island hopping" Campaign, pushing Japanese forces back towards their homeland. During the course of the war, American scientists were able to develop a working bomb first, which was then used against the cities of Nagasaki and Hiroshima, forcing Japan to surrender.

Film reel taken in Berlin following V-E Day shows Allied Powers exploding several Nazi insignias signaling the defeat of fascism. These film reels eventually found their way to the American Resistance, and were shown in secret in the hopes that it would boost support for resisting the Japanese Empire and the Greater Nazi Reich which now occupy North America.

WWII officially came to an end on 2nd September, 1945 with the official surrender of the Japanese Empire. Following the war, the United States and the Soviet Union entered into a cold war, which nearly came to a head in the 1962 Cuban Missile Crisis, as witnessed by Nobusuke Tagomi.