The Man in the High Castle Wikia
Register
Don't have an account?
Sign In
Advertisement
in: Locations

Berlin, Greater Nazi Reich
The Volkshalle ("People's Hall"), also called Grosse Halle ("Great Hall") or Ruhmeshalle ("Hall of Glory") is the center of government in the city of Berlin and the Greater Nazi Reich, with the office of the Führer situated within. It is the centerpiece work of Adolf Hitler's chief architect, Albert Speer.

From a towering podium within the main chamber, speakers can address up to more than 150,000 gathered people. Seating exists as three tiers enclosing a giant circular arena, while many thousands more may also be accommodated on the open floor. The building itself physically consists of a vast granite podium, and is iconic for its monumental dome that dominates Berlin's skyline, and rivals other such massive structures as the Empire State Building in New York City. In front of the Volkshalle sits the Reichstag building, completed in 1894 and formerly housing German and Nazi government before the end of World War II.

In our timeline, the Volkshalle  never left the planning stage. A Schwerbelastungkörper was constructed in Berlin to test if the Berlin area was suitable for the construction of extremely heavy buildings, and the test proved that the ground was insufficiently stable. With the exceptions of moving the Siegessäule victory column and building a new Reich Chancellary, almost none of the Nazi visions for a future Welthauptstadt Germania in Berlin were realized. In our timeline, the Reichtag building was burned in 1933 after which the parliament only rarely convened. Its remaining sessions were held in a nearby opera house.

Though it is the official office and residence of the Führer, Adolf Hitler prefers to spend much of his time at his Führerhauptquartiere ("Führer Headquarters") in the Austrian Alps. He does, however, return to the Volkshalle and Berlin on official matters, as when Obergruppenführer John Smith delivered one of the films to him. Having viewed the film (which depicted the fall of Berlin) in his private office, Hitler became enraged, dismissing Smith with orders to find the Man in the High Castle.

Later, Hitler would collapse and fall into a coma in his mountain residence, and Martin Heusmann was subsequently brought to the Volkshalle to take up the position of acting Chancellor. Heusmann occupied the office of the Führer as he, apparently reluctantly, accepted the new position. Soon afterwards, upon Hitler's death, he would address the entire Reich from this office, in which he accused the Japanese Empire of being responsible for the assassination, effectively declaring war.

Following this, Heusmann  and his son Joe Blake attended situation meetings with the top generals of the Reich's military, as they hammered out the details for an impending nuclear war with the Japanese. The arrival of John Smith from New York, with evidence revealing Heusmann to be behind Hitler's death, ended the conspiracy and the brewing war. Heinrich Himmler placed Heusmann and Joe Blake under arrest, and addressed the gathered masses within the Volkshalle's main chamber. Citing the failure of the coup d'etat, the SS chief declared that the plot against the Reich had been foiled. John Smith was then given the podium and hailed as a hero by the thousands of attendees.

The dome of the Volkshalle was to rise from a massive granite podium 315 by 315 metres (1,033 ft × 1,033 ft) and 74 metres (243 ft) high, to a total inclusive height of 290 metres (950 ft). The diameter of the dome was 250 metres (820 ft). It would have been almost as tall as the Empire State Building in New York City at 1,454 feet (443.2 m) tall. Inside the Volkshalle, there is a massive apse, covered with gold mosaics and enclosing a giant silver statue of the symbol of Germany, depicted as an eagle beneath which is situated the Führer's tribunal. From the podium there, speakers would be able to address more than 150,000 people, seated in three tiers of seats enclosing a giant circular arena. It would have been located where the current Spreebogen Park, Swiss Embassy, German Chancellery, Paul-Lobe House, German Republic Plaza and the Bundestag Building are currently located. To the north of the Volkshalle was the Grosses Becken ("Large Pool") with water provided by the River Spree, similar to the Reflecting Pool in Washington D.C. in front of the Washington Memorial. The Nordbahnhof ("North Railway Station") would have been at the north end of the Grosses Becken near the current Berlin Central Train Station. In the series, monorails can be seen running along the Charlottenburger Chaussee and the Prachtallee, and it is presumed that monorails connected the major train station terminals, the Tempelhof Airport and other major destinations within the city, like the Reichskanzlei ("Reich Chancellery") near Brandenburg Gate, the Berlin Olympic Stadium in the western half of the city north of Charlottenburger Chaussee, and Berlin Stadtbahn near Alexanderplatz ("Alexander Plaza") in the east.

The Volkshalle was to be at the northern end of the Prachtallee ("Avenue of Splendours") which would have been built on the earlier proposed Siegesallee ("Victory Avenue") which was a north-south boulevard originally planned by German Emperor William II in 1895. The Triumpfbogen ("Arch of Triumph"), was to be a huge triumphal arch that was to be 117 meters (383 ft) high and 170 meters (557 ft) wide, or about three times as large as the Arc de Triomphe in Paris. The arch was to be constructed after the Second World War, and was to honor the Germans who fell during previous wars, located at the southern end of the Prachtallee near Tempelhof Airport near the current Kolonenstrasse-Dudenstrasse. The Prachtallee would have terminated at the proposed Südbahnhof ("South Railway Station") near the current Berlin Südkreuz train station. 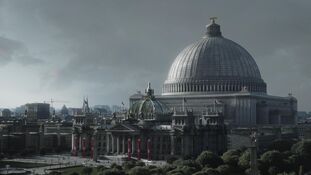 Exterior view of the Volkshalle, with the Reichstag in front 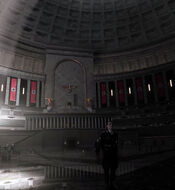 Interior of the main chamber 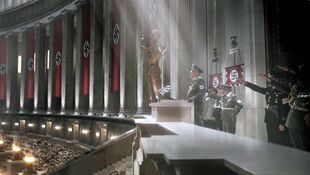 Heinrich Himmler addresses the gathered crowds from the podium 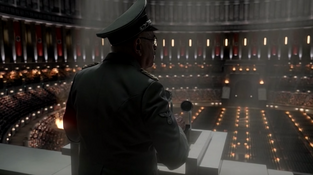 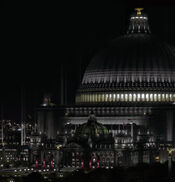 The Volkshalle at night
Community content is available under CC-BY-SA unless otherwise noted.
Advertisement