The Man in the High Castle Wikia
Register
Don't have an account?
Sign In
Advertisement
in: Article Stubs, Characters, Male Characters, Season 1 Characters

"The Illustrated Woman"
Mr. Kahler, otherwise known as The Marshal, is a bounty hunter that operates in the Neutral Zone to carry out the Nazis dirty work such as hunting escaped concentration camp victims, whose images he has put on playing cards.

His reputation is well known to everyone in the neutral zone where he is able to operate unopposed and without restraint since the Neutral Zone remains pretty much a lawless area. He is especially most feared for his cruelty that show to his victims, usually cutting two fingers from the dead bodies as "trophies" and hanging them in open view until the bodies rot or burns them alive. He keeps the people he's hunting on playing cards and memorizes the person he is hunting with every detail. 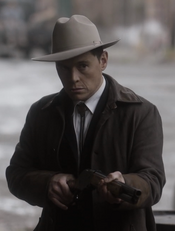 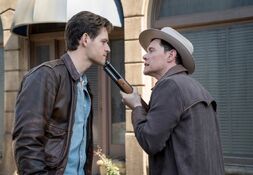