The Man in the High Castle Wikia
Register
Don't have an account?
Sign In
Advertisement
in: Seasons

The First Season of The Man in the High Castle was officially released on November 20th, 2015 on Amazon Prime Video.

Joe Blake lives in New York City under the Greater Nazi Reich. He joins the American Resistance to deliver a package to the Neutral Zone. However, he is a double agent working for Obergruppenführer John Smith. He discovers, against orders, that the package he is carrying is a newsreel.

Juliana Crain lives in San Francisco under the rule of the Japanese Empire. She becomes embroiled in the American Resistance after her half-sister, Trudy Walker is killed by the Kempeitai. Before her death, Trudy entrusted a film reel called "The Grasshopper Lies Heavy" to Juliana which shows an alternate World War II where the Allies won. She leaves behind her boyfriend, Frank Frink, to deliver the news reel to a Resistance contact in Canon City in the Neutral Zone.

Frank keeps his Jewish roots a secret and works at an Americana replica factory. When the Kempeitai being to take interest in Juliana's whereabouts, he is arrested. As an incentive for him to talk, his sister and her children are also arrested. When Frank cannot answer their inquiries, his family is executed, with their Jewish heritage being the public reason. As an act of revenge, Frank to plan to kill the visiting Japanese Crown Prince and Princess, but can not go through with the plan.

Nobusuke Tagomi is at the center of a conspiracy to provide the plans for the Heisenberg Device to the Japanese Empire. In an effort to assure parity between the two superpowers, Colonel Rudolph Wegener, posing as a Swedish trade official, plans to pass the plans to Science Minister Shimura at a public speech by the Crown Prince. However, the Crown Prince is shot by a sniper. Inspector Takeshi Kido investigates and finds that the shooting is part of a Nazi plot to trigger war between the superpowers. Kido covers up the Nazi involvement in an effort to stave off war.

Tagomi somehow finds himself in an alternate San Francisco where the Allies won World War II. 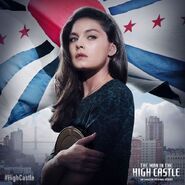 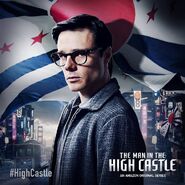 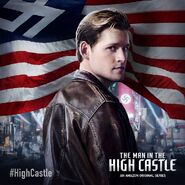 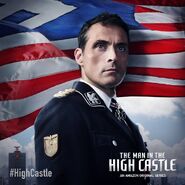 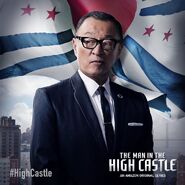 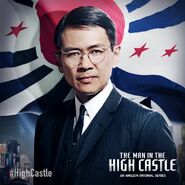 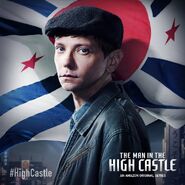 Season 1 - Official Trailer - What If?

Season 1 - Behind the Scenes

Season 1 - Hands in his Pocket

Season 1 - Why Was This Man Left Unattended?

Season 1 - The Partition of the Americas

Season 1 - Take Me Out to the Ball Game