The Man in the High Castle Wikia
Register
Don't have an account?
Sign In
Advertisement
in: Factions, Nazi Affiliated Factions 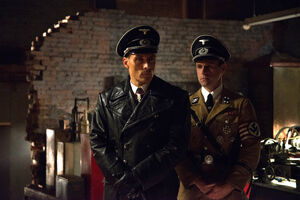 The Schutzstaffel (Protection Squadron), or simply "SS", is a paramilitary force of the Nazi Party, and the foremost instrument of security, surveillance and terror in the Greater Nazi Reich. Its main headquarters is the Prinz-Albrecht-Strasse building in Berlin. The SS also maintains a sizeable overseas headquarters in New York City.

It was founded in 1925 by Julius Schreck originally as a bodyguard unit to Adolf Hitler, before growing into one of the most powerful military organizations in Nazi Germany. Under the leadership of Heinrich Himmler, it grew from a small guard unit to a million-strong army at its height. Serving as Hitler's private army, the SS was tasked with disposing of the Fuhrer's political enemies and enforcing his will on the populace. Their responsibilities also included staffing Nazi concentration camps, conducting conventional military operations (Waffen-SS) and serving as Hitler's personal security force. After the war the Schutzstaffel continued to serve as the Nazi Reich's main security force removing all opposition and "undesirables" from occupied territory. Loyal Nazis and collaborators from all occupied nations were added to the organization's ranks after the war..

The SS raids a resistance hideout.