The Man in the High Castle Wikia
Register
Don't have an account?
Sign In
Advertisement
in: Article Stubs, Characters, Female Characters,
and 2 more

Sarah Murakami was an American of Japanese descent, and a member of the Resistance.

Little is known about her parents other than her father's love of the Japanese Empire and that they were forced to stay at the Manzanar US concentration camp. While there, she was disliked by the Americans for being Japanese and disliked by the Japanese for being American (making her a traitor). She claims she became a part of the Resistance so that she could be defiant and that she doesn't 'hate' anyone.

After stealing some explosive material with Frank Frink, she tells him secrets about her growing up, to which he calls her 'firebrand.' This leads to them having sex. The next day they talk about the films, while she subtly flirts with him, which eventually evolved into an official relationship.

However, later on Sarah becomes angry with Frank when he apparently blow their attempt to kill General Onoda, but Frank reveals that he did so because he realized that the compound that the General was visiting is used by the Japanese in their effort to build an atomic bomb.

In an attempt to cripple the Japanese leadership in San Francisco before they could complete their project, Sarah and Frank agree to plant a bomb inside the Nippon Building, headquarters of both the Kempeitai and the Japanese military. Unfortunately, their attempt to escape the building are compromised when Inspector Kido recognizes Frank. In a final act of defiance, Sarah and Frank start to shoot at the Japanese officers in the building, before the bomb explodes, devastating the building and killing numerous people. Among them there is Sarah who perish along the explosion, while Frank has apparently meet the same fate, until in Season 3 it is revealed that he actually survived but he has suffered burns as a consequence of the explosion. 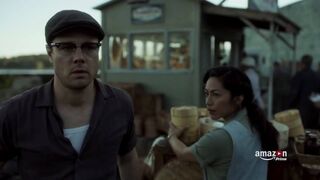 Sarah and Frank work the dock to scope out the explosives 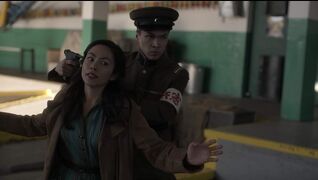 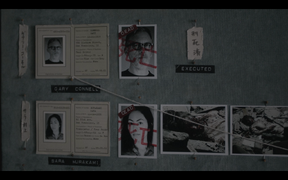