The Man in the High Castle Wikia
Register
Don't have an account?
Sign In
Advertisement
in: Locations, Cities

San Francisco is a major city within the Japanese Pacific States, and along with New York City is the center of the former Axis powers occupation of America. Both the Nippon Building and Nazi Embassy are situated here (it appears that the Embassy is located in Golden Gate Park, while the Nippon Building is located somewhere downtown). The Japanese military did bomb sections of the city during it's initial invasion (this is made apparent when an undetonated bomb was salvaged of its explosive contents, later used to bomb the Nippon Building by Frank Frink). Pre-war San Francisco was a hub for Asian immigrants coming into America, such as Chinese-Americans and Japanese-Americans. By the time the Pacific States were established, there was already a community of Asians and it was relatively easy to assimilate them into the existing Japanese culture. The city is now adorned with Japanese-language signage and culture. In addition, the Golden Gate Bridge now has the emblem of the Japanese Empire to signify its rule. 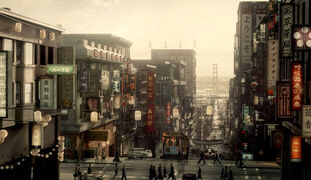 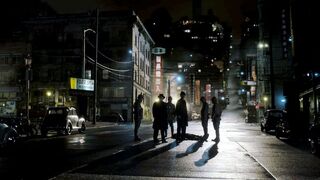 San Francisco after the explosion at the Kempeitai headquarters. 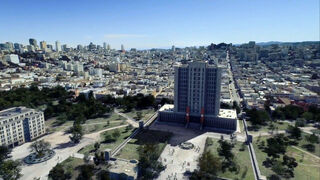 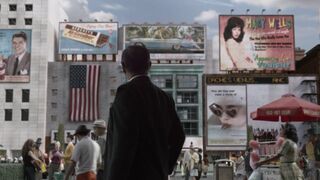 Tagomi travels to a different universe and sees San Francisco as America having won the war.
Community content is available under CC-BY-SA unless otherwise noted.
Advertisement