Rudolph Wegener was a Nazi German colonel, under the guise of a Swedish businessman named Victor Baynes, undertook a plot with Trade Minister Nobusuke Tagomi in exchanging secrets from the two occupying forces in the United States, notably including the transfer of stolen blueprints for the Greater Nazi Reich's Heisenberg Device.

Wegener was later pressured by Oberstgruppenführer Reinhard Heydrich to assassinate Adolf Hitler. However, the weight of guilt due to the previous atrocities in which he took part, combined with verbal coercion by Hitler, leads Wegener to commit suicide.

Not much is known of Wegener's life before joining the Nazi Party, except that he was born in Berlin before the Nazis "remodeled" the entire capital. Apparently, Wegener originally believed in the Nazis' ideology and actively participated in the Nazi war effort during World War II. It is unclear what Wegener's exact role was, although he may have taken part in the "cleaning operations" (genocide) in the territories occupied by the Nazis during the war. In America, he forged a friendship with local American Nazi collaborator John Smith, who later on would become an Obergruppenführer in the American branch of the SS.

However, the psychological toll of the atrocities that Wegener took part in eventually disillusioned him from the Nazi ideology and made him ashamed of his role in the Nazis' victory. Wegener, in particular, became disgusted of the radical totalitarian transformation that the Nazi party did in Germany and in the rest of the Reich, especially in Berlin. In trying to atone for his sins, Wegener decided to help Tagomi in his plan to allow the Japanese Empire to develop its own nuclear program to use as a final deterrent against a potential pre-emptive nuclear strike by the Greater Nazi Reich. Wegener knew he would likely face reprisal by the Nazis authority once his goal was completed, including execution.

During the course of the series, in Tagomi's and Wegener's original plan, Wegener, posing as a Swedish businessmen, would have met the Director of Japanese Scientific Research and given to him a microfilm which contain the indispensable information to build the Heisenberg Device (that Wegener previously managed to steal from his Nazi work office) during Crown Prince Akihito's speech at San Francisco. However, their plans were jeopardized by the assassination attempt on the Crown Prince, which made further attempts to complete the mission too risky in Tagomi's view. Despite this, Tagomi and Wegener had a stroke of luck when they found out that the Science Minister had an appointment in the hall of the same hotel where Wegener was staying; the opportunity would nonetheless run the risk of Wegener being recognized. Having gone ahead with the plan, Wegener's presence did become known to a Nazi intelligence officer present.

Subsequently, during a stopover in New York City on his return flight to Berlin, Wegener was deceived by John Smith, who invited him to a party celebrating VA Day with Smith's family and Joe Blake. After the celebration and apparent catching up, Smith revealed his plan by handing Wegener over to the SS. However, to Wegeners' surprise, the SS did not torture him but, instead let him meet Reinhard Heydrich. Heydrich planned to use Wegener as a tool in his planned coup d'etat against Adolf Hitler, threatening Wegener's family if he did not agree to act as the assassin. Reluctantly, Wegener agreed to the ultimatum, and returned to Berlin to give his family one last farewell before traveling to meet Hitler. 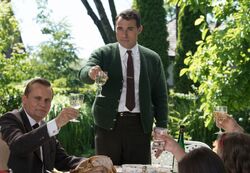 Face-to-face with the Führer at his mountaintop residence, Hitler revealed to Wegener's horror that he already knew of Heydrich's plans, and that he was not scared at all of Wegener. Hitler knew too well that Wegener was sick of killing and that his death would result in bringing to power the same people who want to wage war against the Japanese Empire, which would mean that Wegener's actions would cause millions of deaths. Hitler gave him the choice to commit suicide in exchange for extending protection to Wegener's family. While Hitler received news of Heydrich's capture at the hands of John Smith over telephone, Wegener shot himself in the head.

Tagomi later contacted Wegener's residence in Berlin to inquire about his whereabouts. Wegener's wife, answering the phone, became highly emotional at the mention of her husband. She revealed to Tagomi that her husband was dead and had been declared a traitor by the state, much to the latter's sorrow.