The Man in the High Castle Wikia
Register
Don't have an account?
Sign In
Advertisement
in: Characters, Male Characters, Historical Characters,
and 3 more

Lina von Osten (Wife)
Klaus Heydrich
Marte Heydrich
Silke Heydrich
Heider Heydrich
Reinhard Tristan Eugen Heydrich (March 7, 1904 - ca. 1962) was a high-ranking German Nazi official in the Greater Nazi Reich and one of the main architects of the Holocaust. After being arrested for treason, he was executed by then-Obergruppenfuhrer John Smith's SS officer, Erich Raeder after inadvertently revealing Martin Heusmann as the coup mastermind.

He was an SS-Oberst-Gruppenführer and General der Polizei (Senior Group Leader and General of Police) as well as chief of the Reich Main Security Office. He was also Stellvertretender Reichsprotektor (Deputy/Acting Reich-Protector) of Bohemia and Moravia and President of the ICPC and Reichsprotektor of all occupied territories, and assisted Arthuur Seyss-Inquart in crushing the rebellion in Africa with appalling massacres.

During the cold war with Japan, Heydrich planned an assassination on the Japanese crown prince in hopes of sparking a war with Japan. When Rudolph Wegener was arrested by Obergruppenführer Smith for delivering German military secrets to the Japanese, specifically the plans for the Heisenberg Device, Heydrich personally traveled to America to have Wegener transferred to his custody. He had also planned to have Wegener kill Adolf Hitler to clear the way to war with the Japanese. However Smith had discovered this, and warned Hitler of Heydrich's plan. While hunting with Smith, Heydrich attempted to gain Smith's support, but Smith refused. When he was expecting a phone call from Wegener, he actually received a call from Hitler and was immediately arrested by Smith seconds later.

After Hitler succumbed to his poisoning, Smith mislead an imprisoned Heydrich into thinking Germany and Japan were already at war, leading Heydrich to confirm what Smith had suspected: a conspiracy to create a pretext for war with the Japanese exists among the Nazi ranks. Smith then had his subordinate Erich Reader execute Heydrich, but not before revealing Martin Heusmann as the mastermind behind the rush to war.

After the years following the war, Heydrich has aged significantly and has lost most of his hair. Heydrich seemed to "enjoy" his job as an SS officer, and especially the work he has done in Africa. His recollections of his African campaigns disturbed Helen Smith, despite being a fervent Nazi herself and John Smith was wary of him whenever they met. 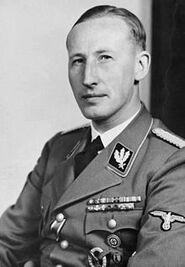 Real life Heydrich as an SS-Gruppenführer in 1940. 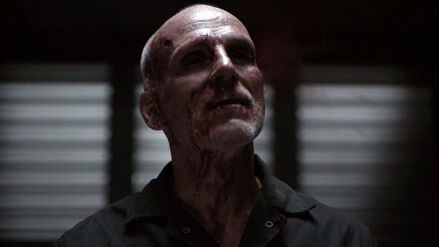