The Man in the High Castle Wikia
Register
Don't have an account?
Sign In
Advertisement
in: Article Stubs, Locations, Cities

New York City was a major city of the former United States, and is now the capital of the American Reich. It is home to the headquarters of the American branch of the SS, where Obergruppenführer John Smith and agent Joe Blake are based.

Ever since the destruction of Washington D.C. in 1945 by a German atomic bomb, New York City has served as the capital of the American Nazi puppet government. Before and after the war, it was and still is the political, cultural, social, and economical capital of pre-war America. Post-war, it prominently displays Nazi symbolism, most notably in Times Square with Nazi swastika displays as well as propaganda posters. Next to the city itself is the Empire State Building covered with a Nazi Reichsadler on top and a banner.

The city's most famous monument was the Statue of Liberty, originally built and dedicated in 1886 as a tribute to pre-war American ideas of liberty, equality, independence, and freedom. It has since been taken down and replaced by a new statue representing Aryan superiority, authority, and Nazi military might. Eventually, under Reichsführer Himmler, the Nazis would enforce a program to suppress all form of "reminder monuments" of the former country.

To this day, New York City is the headquarters of Nazi rule in the former eastern and midwestern America. 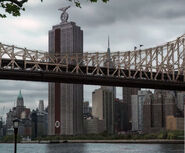