The Rocky Mountain territories of the former United States and Canada

The Neutral Zone, also known as the Rocky Mountains States, is a buffer-state between the Japanese Pacific States and the American Reich, which controls territory along the Rocky Mountains stretching from Arizona and New Mexico in the south all the way into the Northwest Territories in former Canada. It also borders the Canadian Reich in the Northeast (Although not mentioned), and Mexico to the South.

After the failed attempt by the American Resistance to assassinate Heinrich Himmler, the Neutral Zone is invaded by Nazi America to crush the remnants of the Resistance. Denver, along with several other cities are raided by the Reich, but not annexed directly. The Japanese Pacific States strongly condemned the attack, accusing the Reich of violating the 1945 West Point Peace Treaty

The territory of the Neutral Zone is composed of the central region of the former USA and Canada, that both the Nazi Reich and the Japanese Empire relinquished of occupation. From Idaho to New Mexico, its territory is the smallest of the three states, including the eastern third of Washington State, almost all of Idaho, the western third of Montana, the western two thirds of Wyoming, the eastern half of Utah, the Western two thirds of Colorado, central part New Mexico, and a small region of western Texas. The country borders The American Reich to the east, Canadian Reich to the northeast, the Japanese Pacific States to the west, and Mexico to the south.

Though it is never shown onscreen and is only mentioned in the credits, the Neutral Zone has its own national flag. The delegation of the remnant U.S. government to the "Peace Conference" managed to trick the Nazi and Japanese delegations into using a variant of the Denver City and county flag, which is a zigzag white stripe which horizontally separates a red field below from a blue field above. However, the delegation removed the center yellow circle on the blue field due to its resemblance to the Japanese Rising Sun. The flag was accepted in the Peace Conference of 1947. Given the particular patterns of the flag, it may have contributed to the colloquial name of the zone as the "Rocky Mountains States", though by 1962 it appears that the flag is only flown in the capitol government of the Neutral Zone at Denver, as well as possibly a few other mayoral cities in the region (given that in Canon City the flag is never shown).

In our world, the Flag of Denver is currently used and was first introduced in 1926, having been designed by a high school student.

The capital of the Neutral Zone is Denver, which was the only major city (at the time) in the region that both the Nazis and the Japanese Empire relinquished control over. However, the city is small and poor compared to San Francisco and New York City. It is unclear what the methods of election and governance of the Neutral Zone are, though it seems that the "Head of State" of the Neutral Zone takes the title of "Governor" (though governor is usually the title of the head of a non-sovereign or sub-national level of government). Moreover, the country is politically neutral and does not possess an official army or national militia. The local police itself is limited in its armament and size, so much so that they are only active in major cities and along main transport routes (though Joe Blake and Juliana Crain never encountered any onscreen). This has the advantage of helping the American Resistance to operate in the country largely unopposed by the local authorities. On the other hand, in an effort to combat these problems, state officials give license to "bounty hunters" to operate in the territory in place of the police.

The Neutral Zone has a poor economy, dependent on The American Reich and the Japanese Pacific States. It is dependent on the importation of raw materials, including oil. Though not the official currency, the Reichsmark is used in almost all transactions within the country.

Canon City is a city acting as a safe haven for many of those escaping the tyranny and oppression of the Japanese Empire and the American Reich. There are numerous anti-fascist and anti-Imperial propaganda posters scattered about the town, obviously leftover from the war.

Denver, formerly the United States capital of the state of Colorado, is now the capital city of the Neutral Zone.

Sabra, also known as Saint Theresa, is a community that protects many Jewish and Christian people. It is a Christian-dominated community, and hails Jesus and the Virgin Mary. 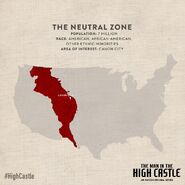 The map of the Neutral Zone.