"For The Common Good"

The American Reich, officially known as the Nazi American Reich, was an autonomous state within the Greater Nazi Reich, consisting roughly of the eastern and Midwestern halves of the former United States. It bordered the Neutral Zone to the West, and Mexico to the South.

The United States was conquered by the Nazis at the end of the second World War in 1947, two years after the bombing of Washington D.C. On December 11th, 1945 by the German Heisenberg Device and the subsequent surrender of the former country, following the capitulation of the United States government.

Though initially victorious, both the German Reich and the Japanese Empire had to fight a hard and tenacious retaliation for almost two years before finally putting down the American Resistance and declaring victory (which, within the Reich, became the official festival of Victory Day). After the war, the Reich and the Japanese Empire decided to divide the former United States into three areas. The first area to the east, became a Nazi-Puppet "United States." The second to the west, under control of the Japanese Empire, became the Pacific States of America. The third and final area was situated between the two as a buffer, known as the Neutral Zone.

John Smith died soon after Firecross launched. Upon hearing the news, the de facto leader, Wehrmacht General Bill Whitcroft, cancelled Operation Firecross. The fate of the Nazi-Puppet USA is unknown. However, Bill Witchcroft symbolically takes off his Ritterkreuz, implying that he will denounce the Nazi Ideology, restore the Stars and Stripes, and reunite America.

The Nazi-Puppet USA borders the Neutral Zone to the west, the Gulf of Mexico and Mexico to the south (through Texas), and the north Atlantic Ocean to the east. Canada is never mentioned. Although, it is shown that Canada was also divided, between the Nazis and Japanese. It is implied that Eastern Canada became the "Nazi-Puppet Canada", Western Canada joined the Japanese Pacific States, and the middle area joined the Neutral Zone.

The official flag of the American Reich is still the original Stars and Stripes. But instead of the 48 stars that were in use in 1947. There is now a large, white swastika, in the blue field. The flag is used in conjunction with the regular Nazi Flag (red, black and white), especially during ceremonies and parades.

A new Seal with Nazi symbolism is visible behind John Smith's desk.

The Nazi-Puppet USA's capital is New York City, but its government takes orders directly from the government of the Greater Nazi Reich based in Berlin. The reason that New York City was chosen as the capital, is likely due to the bombing of Washington D.C, during World War II. Afterwards, Washington D.C was rebuilt, but the National Mall still remains in ruins.

The country's head of state is the Reichsmarschall, a position which reports directly to the Führer Adolf Hitler and later his replacement, Heinrich Himmler in Berlin. The position was initially held by Field Marshal Erwin Rommel. Newer holders of the position were American collaborators, like George Lincoln Rockwell and his successor, John Smith.

The Nazis have implemented many of their racial policies in the Nazi-Puppet USA. Jews had to become Protestants, otherwise get deported from the Reich. The Slavs, permanently disabled, Queers, African-Americans, and Hispanics have all been exterminated from American soil. Native Americans, Arabs, East, and South Asians are considered "Honorary Aryans," and are not persecuted. Some Japanese are shown, living in the Nazi-Puppet United States.

The Nazi-Puppet USA has also adopted euthanasia, killing all people with mental or physical disabilities or illness's cremating there remains. As result of these practices, the population of Nazi America is almost entirely composed of White Americans, and the overall population size is considerably smaller (especially given the size of the country).

The Inter-National Socialist Party leads the institutions and the governing body of the American Reich.

The SS serves as the primary paramilitary force within the Nazi-Puppet USA. They act as the states main secruity force removing all dissendents in America as well as an protective force guarding sensitive and secure areas, such as the SS Headquarters in New York City, the border with the Neutral Zone, military checkpoints, airports and the Nazi Embassy within the Japanese Pacific States. They also serve as bodyguards for high-ranking Nazi and American Reich Official's officials.

Uniforms vary considerably due to the various subdivisions within the organization, but the majority of them appear to be black or dark green in colour with SS soldier wearing black military fatigues while officers wear the iconic black tunic. When ordered by John Smith to travel to the Neutral Zone, Waffen-SS operatives wear unmarked, black coats. Ceremonial guards are distinguishable by their black helmet and white gloves. Most SS vehicles, especially those in New York City, bear the inscription GNR Military Police (a rough but modern English translation) on the front and sides.

The Geheime Staatspolizei or Gestapo for short is the official Nazi secret police force. They are responsible for political based crimes removing all dissidents and opposition to the Nazi state as well as uncovering any disloyalty to the Fuhere in the local population.

Although brutally purged and dis-empowered by Adolf Hitler in 1934, the SA (often known as the "Brownshirts") are still seen to operate in some capacity within The Nazi-Puppet USA. In Season 1 they participate in an SS-led attack on the resistance in New York City .

The Orpo are the regular uniformed police. In That, they are composed of local police departments who are responsible for investigating regular, non-political breaches of the law within The American Reich. Some were regular law enforcement agencies in pre-World War II America that have been absorbed into the new Greater Nazi Reich law enforcement structure.

Examples include the New York City Police Department, which is seen to still be active in policing New York City throughout the series (with minor changes to the uniform such as Swastika armbands and badges). Another example is the Missouri Autobahn Patrol, presumably a reorganized Missouri State Highway Patrol, of which a Trooper pulls over Joe Blake in Season 1.

The Kripo are the criminal investigation department. They are said to have taken control of the investigation into the death of Alice Adler in Season 1.

The armed wing of the Greater Nazi Reich Public Health Department responsible for the state sponsored euthanasia programme. Officers are seen towards the end of Season 2, when Thomas Smith voluntarily turns himself in to be killed as a result of his genetic defect.

The Sicherheitsdienst is the intelligence agency of the SS, which operates throughout the Nazi-Puppet USA, and the Greater Nazi Reich. It utilizes agents such as the Origami Man to travel into areas such as the Neutral Zone.

The economy of the Nazi-Puppet USA is considerably prosperous, being closely tied to that of the rest of the Reich. The Reichsmark is the official currency.

Much like Berlin and other parts of the Reich, The American Reich is home to considerable technological advancements. Such technology includes: high speed Concorde-style jet aircraft, intricate train systems and video telephones.

New York City is now the capital of the Nazi-Puppet USA, and home to the headquarters of the American branch of the SS, where John Smith and agent Joe Blake are based.

Cincinnati is a city in the Nazi-Puppet USA, and the site of a battle between the American Resistance, and the German Wehrmacht. John Smith witnessed part of this battle in a dream in which his son, Thomas Smith, appeared to him. He watched on as German troops murdered American Rebels. John smith use to go fishing in Cincinnati but stopped after the Nazis began exterminating all Jews in the city.

Savannah is a city in the American Reich located in the Nazi-Puppet U.S state of Georgia.

Following the death of Hitler, there was a mass uprising of Resistance members across The American Reich (identified by Erich Raeder), and a large number of German SS men were dispatched to quell it under the command of Gruppenführer Keller. Keller suggested razing Savannah in order to discourage further insurrectionist activity, a plan which the American-born John Smith was less than enthusiastic about. Immediately before leaving for Berlin, Smith instructed Raeder to cancel plans to destroy the city, saying "I won't burn one of our cities".

New Berlin is a city in the Nazi-Puppet USA. According to the map, it is implied that the city, was formerly known as Springfield, Illinois.

Carl was incarcerated in the New Berlin concentration camp before escaping in 1954. 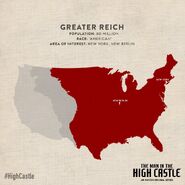 The Map of The American Reich.