The Man in the High Castle Wikia
Register
Don't have an account?
Sign In
Advertisement
in: Article Stubs, Characters, Male Characters,
and 5 more

Kotomichi is the trusted aide of Trade Minister Tagomi of the Japanese Pacific States, usually helping Tagomi in the daily work at the Japanese Trade Mission. However, he becomes a much more influential character after he is revealed to be from an alternate timeline (likely ours) where his home city of Nagasaki fell victim to the atomic bombing by the Allied powers.

We don't know much, other than that he says that he left home from Japan after their victory, and is from Nagasaki in the home islands of the Japanese Empire.

At the start of the series, Kotomichi is shown in his usual position as trusted aide of Tagomi, helping him in any way. However, Tagomi never involved Kotomichi directly in his special partnership and mission with Rudolph Wegener for his safety.

When Tagomi comes to realize the ultimate effects of his actions (which instead of preventing a nuclear war, may actually start one) he admits to Kotomichi that he is starting to think that he is only an old fool. Kotomichi, then emotionally responds to Tagomi that he is "a good person, perhaps too good for this world," urging Tagomi to continue with his consulting of the I Ching and to not lose hope, which surprises Tagomi, prompting him to ask Kotomichi if there is something wrong but he evades the question.

In "Three Monkeys", whilst picking up a file Juliana dropped, Kotomichi is shown with burn scars on his right arm, burns similar to Hibakusha victims.

In "Detonation", it is revealed that Kotomichi is in fact originally from a universe similar to our own, in which Japan lost World War II and Nagasaki was destroyed by an atomic bomb. As a result of the nuclear destruction, Kotomichi lost his family and was gravely injured. While recovering in hospital, Kotomichi trains himself in meditation techniques to control his physical pain, inadvertently acquiring the power to travel to a parallel universe in which Nagasaki was not destroyed and his family was still alive. (The question of the fate of Kotomichi's "alter ego" from the primary world of The Man in the High Castle is left unresolved.)

Kotomichi eventually continued to live in this new reality, meeting and working for Tagomi, and recognizing that Tagomi was starting down a path leading to inter-dimensional travel similar to his own. While keeping his own origins a secret, he continued to support Tagomi and covered for his absence at the Trade Mission when he spent an extensive period in his alternate reality.

Upon Tagomi's return to his own reality, he correctly guessed Kotomichi's secret and Kotomichi admitted the truth. Kotomichi assisted Tagomi in stopping the unfolding of the war between the Japanese Empire and the German Reich by passing along the film Tagomi obtained from his daughter-in-law Juliana Crane in the alternate timeline and giving the film showing the United States hydrogen bomb test film footage to John Smith. Smith then watches the film and takes it directly to Berlin where the High Command watch the film that prevents the Nazis from attacking Japanese targets, with the impression that they already have several weapons ready to use in their defense.

As the series progress, Kotomichi is show to have a caring and even protective behavior towards Tagomi, while is shown to have a more colder attitude toward others in the Trade Mission, especially with Juliana Crain, since Kotomichi fears that her presence will cause trouble for Tagomi, given her past experiences with the Kempeitai.

Kotomichi has a close relationship with Nobusuke Tagomi and sees him as somewhat of a mentor and a surrogate father. 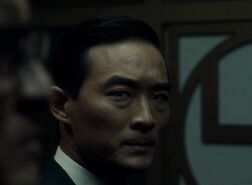