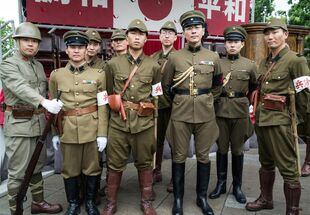 The Kenpeitai (憲兵隊 Kenpeitai, "Military Police Corps") is the military police and secret police branch of the Imperial Japanese Army throughout the Japanese Empire, including the Japanese Pacific States.

The Kenpeitai was formed in 1881. It was inspired by a similar organization in France.

Operationally, the organisation is divided into two primary branches. The first is uniformed, who act as uniformed police officers and liaise with regular troops within the Imperial Japanese Army in maintaining public order and law enforcement. The second is the plainclothes division, who carry out deeper investigative, intelligence-gathering and counter-intelligence operations.

The Kempeitai uniforms on the right and the middle.

The Kempeitai policemen (left), next to regular Imperial Army soldiers.
Community content is available under CC-BY-SA unless otherwise noted.
Advertisement