The Man in the High Castle Wikia
Register
Don't have an account?
Sign In
Advertisement
in: Territories, Locations

Western parts of of the former United States and Canada

National Unity is our Virtue

The Japanese Pacific States was a colony of the Japanese Empire, encompassing the western portion of occupied America and Canada. It had been continuously under occupation since the end of the Second World War, after the capitulation of the United States government following the Greater Nazi Reich's nuclear attack on Washington, D.C. in 1946 with a Heisenberg Device. After cementing total victory two years later by quelling the American Resistance, the Japanese Empire and the Greater Nazi Reich partitioned the United States into three areas: the Pacific States of America in the Japanese sphere of influence, Nazi America in the German Reich, and a Neutral Zone separating the two.

After facing attacks from the Black Communist Rebellion, the Japanese withdrew from the Pacific States in 1964. Since the withdrawal, the territory becomes a proto-state, known as the Western States, controlled by the BCR.

The Pacific States territory encompasses the western portion of the North American continent, stretching from Arizona in the south, to Alaska in the north. The Pacific States are bounded by the Neutral Zone on its eastern border. Outside of San Francisco, other locations of note that still appear to be active in the territory include San Diego, Sacramento, Seattle, Los Angeles, Portland, Phoenix, and Vancouver.

The official flag of the Pacific States greatly resembles the Naval Ensign of Rising Sun Flag. A red sun-disc is off-set on a white field, with 12 blue rays of sun, and 8 red stars. The colors of the flag evoke the flag of the former United States, with the 8 stars representing the 6 former American states, one U.S. territory, and Canadian provinces and territories that comprise the Pacific States - Alaska, Arizona, British Columbia, California, Nevada, Oregon, Utah and Washington, and Yukon. Hawaii (U.S. Territory at that time) was directly annexed into the Empire as an Overseas Territory. The flag was created by Admiral Isoroku Yamamoto, who resided in the country until his death.

The economy of the Pacific States is closely tied to that of the Japanese Empire. Due to being in the Greater Co-Prosperity Sphere, the national currency is the Japanese Yen.

After the Black Communist Rebellion blow up the critical infrastructure of the Pacific States, including the Crimson pipeline and several oil tankers; the Japanese Empire enters an oil shortage and were unable to supply oil to their troops handling resistance movements in Australia, China and India.

Under the Crown Princess' suggestion, Emperor Hirohito announces the immediate withdrawal of all Japanese citizens and military personnel from the Pacific States in October 1964. The official evacuation process was completed by November of that year, though clandestine trafficking was facilitated by the Yakuza well after the evacuation. After the withdrawal, American vigilantes form a lynch mob to kill any remaining Japanese citizens living in the Pacific States as a retaliation for the Japanese oppression and discrimination of the American people. In the shows finale episode, it is revealed that Wehrmacht defectors from the GNR along with several senior Nazis are crossing over to the Western states as well.

The Western States is the successor proto-state of the Pacific States, led by a variety of resistance organizations including the American Resistance, BCR and Sabra. Threatened by ReichsFuhrer John Smiths Operation Fire Cross the Resistance and BCR are forced to bunker down and defend from the incoming invasion. It is unknown what happens to the western states after John Smiths death it’s possible that Bill Whitcroft became president and the western states rejoined the restored United States . 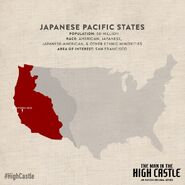 The Map of the Pacific States.