五箇条の御誓文
The Oath in Five Articles

The Japanese Empire, or Empire of Japan (大日本帝國 Dai Nippon Teikoku - literally "Greater Japanese Empire") is one of the two superpowers in the world of Man in the High Castle along with the Greater Nazi Reich. The two powers are in a state of Cold War with Japan in a disadvantaged position due to a technological divide.

Assuming the rise of the Japanese Empire is similar to our world's, the empire's seeds began on March 31, 1854 with the Convention of Kanagawa. Where Commodore Matthew Perry of the United States Navy forced the opening of Japan after 220 years of national seclusion (鎖国 Sakoku). The following years would bring similar (and unequal) treaties with other Western countries and lead to political and economic turmoil. This turmoil would eventually see the collapse of the Tokugawa Shogunate and restoration of Imperial rule in 1868 under Emperor Meiji (明治維新 Meiji Ishin).

In the Meiji Era, Imperial factions resolved to modernize feudal Japan into a power that could rival those in the West (富国強兵 Fukoku kyōhei, "Enrich the state, strengthen the military"). After rapid industrialization and the modernizing of both its military and infrastructure, Japan began looking outward to expand its influence. The Japanese Home Islands were bereft of many raw materials and resources necessary to sustain modern industry, and so the Imperial government saw military expansionism as vital to the Empire's survival.

Now an industrial power, Japan moved to dominate its Asian neighbors. The Empire crushed China in the First Sino-Japanese War in 1895, acquiring the Liaodong peninsula and Taiwan. Finally, and most impressively, Japan defeated the Russian Empire in the Russo-Japanese War in 1905. securing Liaodong and Korea, (later annexing it in 1910) as well as opening up the region of Manchuria to Japanese influence. Notably, this war marked the first time a modern, industrial European nation was defeated in a war by a non-European power.

Emperor Meiji died in 1912 and was succeeded by his son the Crown Prince as Emperor Taishō (大正天皇 Taishō-tennō). During World War I, the Empire aligned with the Allied Powers and declared war on Germany as an opportunity to grab more territory, acquiring the Marianas, the Caroline and Marshall Islands, and the Shandong province of China (German controlled). When the war was won, the Empire demanded a "Racial Equality Clause" in the Treaty of Versailles (with the implicit notion that the West view the Japanese as racially equal), this demand was outright rejected by a number of Allied Powers. This rejection played an important part in the Empire's souring of relations with the West and its reconciliation to Germany after the war.

Taisho died in 1926 and like his father before him was succeeded by the Crown Prince, who became the new Emperor, Shōwa (昭和時代 Shōwa Jidai). Conservative factions within the Imperial government grew ever stronger and more radicalized. Nationalism (always present within the Empire's history) intensified into Kokutai, which at this time, symbolized the ideal that Japan and its people were altogether superior to all other nations on Earth. The military's power grew as well, it effectively deposed civilian power in 1932 and while there was the official pretense of the Emperor in control, the true power lied with the Generals and Admirals of the Imperial Army and Navy, a situation ironically similar to that of a Shogunate.

As Hitler rose to power in Europe, the Japanese were already at war in Asia, seizing Manchuria and transforming into a puppet state, Manchukuo in 1931, then launching a full-scale invasion of China in 1937. Eventally, the Empire allied with Hitler's Reich and the newly formed "Axis" overcame the Allied Powers in World War 2. After their final victory in 1945, the two new superpowers partitioned the territory of the defeated nations between them.

The rest of the huge territory that the Japanese conquered after World War II (the rest of China, India, Eastern Siberia, Malaysia, Philippines, Indonesia, Burma, Australia, New Zealand, the Japanese Pacific States, Baja California, Peru, Ecuador, and Chile) are apparently run in a decentralized manner; as puppet states or protectorates, controlling them likely either economically and/or politically through membership of the Greater Co-Prosperity Sphere. Despite their nominal independence, the Japanese nonetheless consider these countries little more than "colonies".

The official flag of the Japanese Empire, in 1962, is still the Hinomaru, the original civil and state flag of Japan from 1870 to 1962 (a flag with a red sun-disc centered on a white field). However, by 1962, the series shows the flag, in numerous public and official manifestations, as having been largely substituted with the Kyokujitsu-ki (the Rising Sun Flag) which served, since 1889, as naval and army (with slightly variations) ensign of the Japanese Armed Forces, and it's a clear sign and evidence of the militaristic public life of the Japanese Empire and of its policies. The flag is a white field with a red disc slightly to the hoist with 16 rays extending from the disc to the edges of the flag.

Second Flag of the Imperial Japan 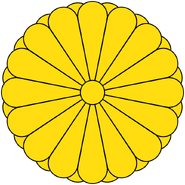 The capital of the Japanese Empire is Tokyo, which has been the capital of Japan since 1869. Although Tokyo has yet to be shown, it is mentioned as the center of economic and political relations of the Greater Co-Prosperity Sphere and therefore the Japanese Bloc. The Japanese imperial government is described as a typical military oriented government, which still officially has the Emperor of Japan, as Head of State, despite him not having any serious political power. The monarchy does not have extensive rule, leaving the government to the military. This however, seems to have created some issues between the Japanese military and the Emperor's Court about the general policies that the Empire must take for the future, especially in regards to their rival superpower, the Greater Nazi Reich, which has a clear advantage over the Japanese Empire, in both technological and scientific development, having created the Heisenberg Device (a nuclear bomb), supersonic jet airliners and even rocket ships. The main divide on the foreign policy towards Germany, is to either take a more aggressive position with the Greater Nazi Reich or continue a policy of "peace and balance".

On the international stage, Japan is the leading nation of the Japanese Imperial bloc, though it seems to be carrying out a more indirect method of control through membership of the Greater Co-Prosperity Sphere. Though formally independent, the Imperial Japanese Army and even the Kempeitai seem to be able to operate with impunity in member nations, and the Japanese government consider these countries little more than colonies. The nations that are known to be members of the Greater Co-Prosperity Sphere are: Eastern Siberia, Mongolia, China, Tibet, Bhutan, Nepal, India, Burma, Indonesia, the Philippines, Australia, New Zealand, the Japanese Pacific States, Peru, Ecuador, and Chile. One last aspect of the Japanese Empire, on the domestic stage, is that in the Japanese Empire, the Yakuza (the most powerful Japanese criminal organizations) has grown relatively stronger than in our timeline, allowing them to be an effective anti-state force. Whilst the Japanese do not pursue a Final Solution-like policy towards non-Japanese and tolerate their existence, they enforce laws and policies that favor the Japanese, with their culture being deemed "superior". This obviously caused immense discontent among their subjects and the Japanese undertake great efforts to ruthlessly suppress anyone that rebels.

Japan is a de jure constitutional monarchy, while de facto it is a one party, totalitarian military dictatorship nominally under Emperor Hirohito.

Japanese scientific development lags significantly behind that of the Greater Nazi Reich, which is a great cause for concern for the empire's leaders.

Modern automatic firearms such as the Type 37 battle rifle (the in-universe equivalent of the real life Howa Type 64) were shown to be in use by Japanese Imperial Guards during the speech by Crown Prince Akihito (that appear to predate in this world their development in our own. However, throughout the series; WWII-vintage Japanese small arms like the Type 38 'Arisaka' bolt-action rifle and the Type 14 'Nambu' pistol were still used by Kempeitai soldiers and officers in the Japanese Pacific States and, quite possibly; the Imperial Japanese Army in the rest of the states).

It was not possible for the Japanese to replicate the Heisenberg Device until Kotomichi accidentally obtained the schematics to build the device. The Japanese began an atomic weapons program of their own in San Francisco but had yet to produce a functioning atomic bomb by early 1962, which meant the Greater Nazi Reich held a decisive military advantage as tensions between the two nations intensified. World War III was only avoided because the Nazis came to believe the Japanese possessed their own atomic arsenal plus a stockpile of Hydrogen Bombs. The Japanese successfully detonated their first atomic bomb at Monument Valley, Utah in Fall 1962, but feared that the Germans would deduce from the test bomb's explosion that they had yet to develop a Hydrogen Bomb.

In Fall of 1962, the Japanese Empire was plunged into a severe oil crisis brought on by an undeclared embargo carried out by the Greater Nazi Reich. Trade Minister Tagomi was responsible for overseeing a project intended to create synthetic oil with the help of Nazi scientists who had defected from the GNR. With the production of synthetic oil underway and the oil embargo lifted by the GNR, the oil crisis is temporarily over for the Japanese Empire.

Tokyo has served as the Japanese capital since 1869, and since the end of the war, it has ruled over the Japanese Empire and it's multiple conquered territories throughout the Pacific. San Francisco serves as the capital of the Japanese Pacific States in North America, under the direct leadership of Tokyo.

Nagasaki is a city located on the island of Kyushu in the Japanese Empire. Nobusuke Tagomi's trusted aide, Kotomichi, and his family are from this city. Tagomi once commented that Nagasaki was a "beautiful city".

In an alternate timeline, this city was destroyed by a nuclear device dropped by The Allied Powers. Kotomichi was injured in this blast, and as he sought meditation to help him with the pain of his burns, he learned how to travel parallel worlds, and sought refuge in one in which the Axis powers won the war.

Divergences with Our World