The Man in the High Castle Wikia
Register
Don't have an account?
Sign In
Advertisement
in: Article Stubs, Characters, Male Characters,
and 2 more

Gary Connell was a ruthless leader of the American Resistance in the Japanese Pacific States, and a recurring character during Season Two.

Though not shown on screen, Gary is detained and executed by the Kempeitai at some point following the bombing of the headquarters, as unveiled in the season premiere Now More Than Ever, We Care About You by a photograph pinned to a billboard in Takeshi Kido's office.

Gary is fervently dedicated to the Resistance, to a major fault. Despite being a leader of a movement outwardly dedicated to bringing freedom to all Americans, he is shown to be an unsympathetic, cruel, and hateful man willing to do whatever it takes to crush the Fascist regimes. Throughout Season Two, Gary is shown to disregard nearly all consequences of his actions, even those that affect innocent civilians and his fellow Resistance members, claiming that they are all for the good of the movement. Gary's recklessness and actions as part of the Resistance ultimately leads to his demise at the hands of the Kempeitai. 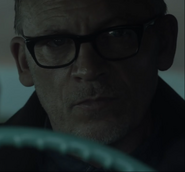