The Man in the High Castle Wikia
Register
Don't have an account?
Sign In
Advertisement
in: Technology
English 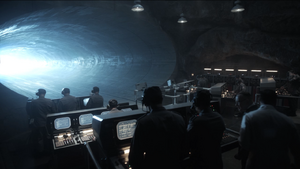 Die Nebenwelt, also known as Projekt 701, was a scientific project overseen by the Ahnenerbe Institute of the Greater Nazi Reich and directed by Dr. Josef Mengele.

Its goal was to produce a quantum tunneling device that could artificially replicate the means by which "Travelers" were able to physically cross between alternate worlds. Reichsführer Heinrich Himmler sought to use Die Nebenwelt to gain access to these alternate worlds in order to invade and conquer them for the Reich.

The Die Nebenwelt device itself was constructed deep within Lackawanna Coal Mine in the Poconos of Pennsylvania in Nazi America. The site was chosen not only because of its proximity to a rare "anomaly", a particularly thin area in the fabric of reality which would make it much easier to breach into alternate worlds, but keeping the device underground would partially contain the damage caused if the device catastrophically malfunctioned; it was estimated that the blast from such a device would have the explosive yield of a small atomic bomb. When activated, the device consumed enough power to light a small city, and caused the anomaly to emit an extremely intense electro-magnetic field and a blinding light as it forced open the portal.

In Fall of 1962, work on Die Nebenwelt was nearing its conclusion. Joe Blake, recently reeducated by Himmler's Lebensborn training program, was sent to the Greater Nazi Reich's embassy in San Francisco under the alias Joe Cinnadella to assassinate Nazi defectors aiding the Japanese Empire, as well as Japanese trade Minister Nobusuke Tagomi, and recover top secret files pertaining to the creation of synthetic oil and Die Nebenwelt. While Joe recovered the files and eliminated the defectors, he was killed by Juliana Crain, who stole the files and returned them to Tagomi. The Japanese thus became aware of Die Nebenwelt for the first time. Juliana decided to destroy the device herself to prevent the Nazis' plans of conquest, and entered GNR territory from the Neutral Zone with the aid of black market smuggler Wyatt Price. If successful, the Nazis would be unable to rebuild the device or construct a new one because its destruction would also destroy the very anomaly it required to function.

Meanwhile, John Smith was read into Die Nebenwelt by Dr. Mengele after he was officially sworn-in as Reichsmarschall of Nazi America. After he apprehended Hawthorne Abendsen and Caroline Abendsen at a farm in the Neutral Zone, he traveled to Lackawanna Coal Mine to witness the latest test of Die Nebenwelt with Himmler. The test produced a breakthrough: four living test subjects were sent into the anomaly while Die Nebenwelt was activated, but only the remains of three of them were left after the test concluded, indicating that the device had successfully conveyed one person into an alternate world. Himmler was ecstatic with the results, even going so far as to order Smith to re-open the Texas oil pipelines to end the unofficial oil embargo against the Japanese Empire in order to ensure Die Nebenwelt did not come under threat, since Tagomi had previously indicated to Smith that he not only knew about the device, but also its function and location.

Juliana, Wyatt, and a group of Resistance fighters infiltrated Lackawanna through an abandoned adjoining mine shaft. They witnessed the test through a ventilation shaft, but before they could decide on a plan to destroy Die Nebenwelt, the vent's shutters broke and gave away their presence to the Nazis. Juliana was captured and taken with Hawthorne and Caroline to a Nazi prison in New York City; Hawthorne was seen as especially vital to Die Nebenwelt's progress because of his knowledge of Travelers. Hawthorne later revealed to Smith that Himmler's dream of multi-universal hegemony was impossible, because individual human beings could only travel to other worlds where they did not already exist.

Following the resistance attack and the disappearance of Juliana Crane, research and breakthroughs into Die Nebenwelt revealed an alternate world, one where the Axis powers lost the Second World War. In this world, it was soon discovered that Germany, Italy and Japan were defeated by the victorious Allies, and the United States and the Soviet Union were the sole superpowers of the world engaging in a nuclear arms race, not unlike the one Germany and Japan had previously engaged in. It is also another world, where the alternate Juliana Crain has died in a car crash there, along with her parents, which is the reason how the original Juliana managed to travel to this world.

Once a stable and permanent connection to this alternate world was established, a colossal campaign of information gathering and infiltration was undertaken, with Nazi America sending operatives through Die Nebenwelt into the alternate world. The operatives were sent and made to blend into that world's society, with corresponding clothing and money. The operatives studied and recorded all aspects of life in the alternate world; scientific advancements, culture, religion, the geopolitical environment, the state of the worlds nations, notably the United States and the Soviet Union. Reichsmarshall John Smith took a particular interest in his alternate self, especially his son Thomas, whose alternate world analogue was alive and healthy.

After the death of John Smith, the portal unexpectedly opens to multiple parallel universes as many people from different dimensions enters the portal, with many American Resistance members watching.