The Man in the High Castle Wikia
Register
Don't have an account?
Sign In
Advertisement
in: Article Stubs, Characters, Female Characters,
and 3 more

"No Masters But Ourselves"
Crown Princess Michiko is the wife of Crown Prince Akihito.

The Crown Prince and Princess visited the Japanese Pacific States early in the first season. After a meeting with Nazi Officials at the German Embassy the Crown Prince gave a speech to a large crowd in San Francisco. Shortly into his speech the Crown Prince was shot, and was rushed to a hospital where emergency surgery was performed. The Crown Princess remained there all night, waiting on word of her husband.

The Crown Prince survived, and the couple would later return to Japan.

Following Tagomi's assassination, the Crown Princess decides to stay in the Japanese Pacific States, actively advocating for military withdrawal. Governor-General Yamori thwarts her efforts, but in the end, she is successful and the emperor proclaims the withdrawal in a radio speech. 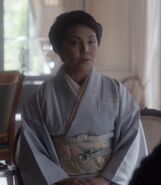 A real life Crown Princess Michiko with her husband in 1959.