The Man in the High Castle Wikia
Register
Don't have an account?
Sign In
Advertisement
in: Locations, Cities

Approximately 4 million
Berlin is the capital of the Greater Nazi Reich. After World War II, Adolf Hitler and Albert Speer were able to make their designs of Welthauptstadt Germania a reality. Berlin is the source of all orders to nazi provinces and puppet states and the resting place of the high command of the Third Reich.

The dome of the Volkshalle was to rise from a massive granite podium 315 by 315 metres (1,033 ft × 1,033 ft) and 74 metres (243 ft) high, to a total inclusive height of 290 metres (950 ft). The diameter of the dome was 250 metres (820 ft). It would have been almost as tall as the Empire State Building in New York City at 1,454 feet (443.2 m) tall. Inside the Volkshalle, there is a massive apse, covered with gold mosaics and enclosing a giant silver statue of the symbol of Germany, depicted as an eagle beneath which is situated the Führer's tribunal. From the podium there, speakers would be able to address more than 150,000 people, seated in three tiers of seats enclosing a giant circular arena. It would have been located where the current Spreebogen Park, Swiss Embassy, German Chancellery, Paul-Lobe House, German Republic Plaza and the Bundestag Building are currently located. To the north of the Volkshalle was the Grosses Becken ("Large Pool") with water provided by the River Spree, similar to the Reflecting Pool in Washington D.C. in front of the Washington Memorial. The Nördbanhoff would have been at the north end of the Grosses Becken near the current Berlin Central Train Station. In the series, monorails can be seen running along the Charlottenburger Chaussee and the Prachtallee, and it is presumed that monorails connected the major train station terminals, the Tempelhof Airport and other major destinations within the city, like the Reichskanzlei ("Reich Chancellery") near Brandenburg Gate, the Berlin Olympic Stadium in the western half of the city north of Charlottenburger Chaussee, and Berlin Stadtbahn near Alexanderplatz ("Alexander Plaza") in the east.

The Volkshalle was to be at the northern end of the Prachtallee ("Avenue of Splendours") which would have been built on the earlier proposed Siegesallee ("Victory Avenue") which was a north-south boulevard originally planned by German Emperor William II in 1895. The Triumpfbogen ("Arch of Triumph"), was to be a huge triumphal arch that was to be 117 meters (383 ft) high and 170 meters (557 ft) wide, or about three times as large as the Arc de Triomphe in Paris. The arch was to be constructed after the Second World War, and was to honor the Germans who fell during previous wars, located at the southern end of the Prachtallee near Tempelhof Airport near the current Kolonenstrasse-Dudenstrasse. The Prachtallee would have terminated at the proposed Südbahnhof near the current Berlin Südkreuz train station.

The Siegessäule ("Victory Column") was designed by Heinrich Strack, after 1864 to commemorate the Prussian victory in the Danish-Prussian War (1864). By the time it was inaugurated on 2 September 1873, Prussia had also defeated Austria and its German allies in the Austro-Prussian War (1866) and France in the Franco-Prussian War (1870–71). It was originally installed at the Königsplatz ("King's Square") where the current Platz der Republik is located but moved to its current location in 1939.

In the alternate reality of the show, the victory over the Allies in World War II (1939-1947) would have also been recognized, and Victory over America day, or VA Day would have been on 18 September 1947. The Victory Column is currently installed in a plaza on the Charlottenburger Chaussee, now called 17th of June Street, or Strasse des 17. Juni to commemorate the uprising of the East Berliner workers on 17 June 1953, when the Soviet Union Red Army and East German Volkspolizei shot protesting workers. This street stops at the Brandenburg Gate and then continues to proceed east, known as Unter den Linden ("Under the Linden Tree") Boulevard that extends towards the Stadtschloss ("Berlin Palace") and the Berliner Dom ("Berlin Cathedral") in the east. 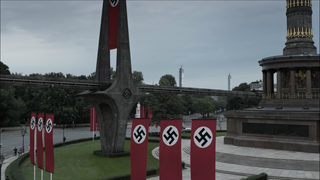 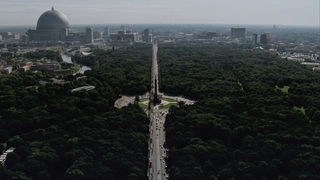 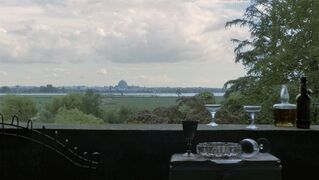 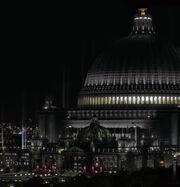 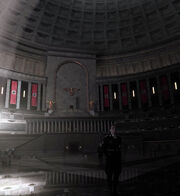 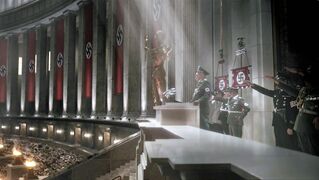 Himmler gives his speech in Volkshalle.
Community content is available under CC-BY-SA unless otherwise noted.
Advertisement