The Man in the High Castle Wikia
Register
Don't have an account?
Sign In
Advertisement
in: Factions, American Resistance

The American Resistance, also referred to as the Rebels, Resistance and previously known as the United States Army (1945-1947), is a network of freedom fighters operating throughout the Neutral Zone, the Pacific States of America, and Nazi America. 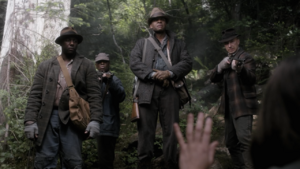 The United States and Allied powers surrendered in the Second World War against the Axis Powers, with the US government capitulating as a result of the Atomic Bombing of Washington D.C. in 1945.

With official government forces having surrendered, the resistance started with the formation of the Rebel American Army, a self described "bunch of rejects" from all corners of the country, who pledged to remain fighting and prevent the advancement and occupation from both the Japanese Empire and the Greater Nazi Reich.

Several large scale conflicts took place during the RAA campaign against the invading and occupying forces. This included the Battle of Dayton, in which film and television actor John Wayne was killed, and a large scale incident in the Ohio city of Cincinnati.

Although lasting two years, the efforts of the Rebel American Army ultimately failed and eventually collapsed. Adolf Hitler declared on September 18th, 1947 that the last of the rebel forces had been crushed, and the Greater Nazi Reich had consolidated complete control of the region that would later become Nazi America. This day would later become known and celebrated as VA Day.

After the official defeat, surviving members of the RAA simply became known as the Resistance. Even though Germany and Japan rule America with an iron fist via Nazi America and Pacific States of America, the Resistance operates secretly and carefully underground and undercover, mostly in the Neutral Zone.

The Resistance, possibly aided by Nazi Hauptsturmführer Connolly, made an assassination attempt against SS Obergruppenführer John Smith in 1962, killing Smith's driver and severely wounding SS officer Erich Raeder. Smith was only slightly wounded and managed to kill all but one of the attackers. Smith captured the last attacker alive. It was later revealed that the Resistance was supported by Reinhard Heydrich in order to get SS Obergruppenführer John Smith out of the way for Martin Heusmann's grand plan of domination of the Reich.

Simultaneously, the Resistance conducted another ambush against Hauptsturmführer Lautz, and were successful in killing him.

Attack on the Kempeitai

The Resistance began their attack on the Kempeitai, by shooting them and bombing their headquarters in San Francisco.

The Uprising in the American Reich

The Death of Adolf Hitler was exposed by the Resistance members, when they kidnapped Lucy and threatened her husband Henry Collins, who was then forced to reveal Hitler's death on television. Hitler's exposed death caused the uprisings in Nazi America, including the rebellion in Savannah, Georgia.

Due to the Nazi event, known as the "Jahr Null" or Year Zero, in Nazi America, two Resistance members, Wyatt Price and Jeremy Johnson, retaliates by attempting to assassinate Reichsführer Heinrich Himmler, who was shot and severely wounded in New York City. In the aftermath, he was taken to the hospital by ambulance and was later in surgery. Himmler survived the attempt.

In order to prevent Operation Firecross, the Resistance again planned to kill John Smith, now the Reichsführer of North America. With help from his wife, they plant a bomb in the bridge on which Smith's bullet train was traversing through. The explosion derailed the train and killed Helen Smith, but Smith escaped unharmed.

Smith also survived the ensuring gunfight, but he eventually killed himself after regretting his support of Nazism.